I am bringing this issue up again after it was closed, but not fixed.

ABRP will not use Hwy 140 to route from Mariposa, CA to El Portal, CA, which is the most direct route.

I have set all settings back to default, everything I can think of and it will not use that road!

The upper level issue is Open Street map, which ABRP relies on. Also relates to how ABRP's router deals with OSM issues. I've found and fixed a few of these sort of issues in Open Street Map. Perhaps ABRP should write a discussion on these issues, and how ABRP can't fix all the issues with OSM, just too big of a problem, and ABRP does not and can not have the local knowledge needed to fix these. When a bug report arises that is really a OSM issue, reference this document rather than just closing the bug. Or make a catagory of bug for OSM mapping issues. Or somehow communicate better about this... Enhancement request, I'd guess.

It would be nice if ABRP's router was somewhat more forgiving of some of these, such as:

Can handle this route just fine. That is an enhancement request.

The problem seems to be in the traffic signals. I suspect if someone that understood how OSM should have these set up, it might fix this problem. I don't have this understanding, or the time, or I'd fix it. Perhaps "Direction Affected" should be "both" or "forward".


I'm just a ABRP user, and I've devoted effort to fix bugs near me, or on trips I'm likely to take. I've also reached out to the OSM community and asked for help on occasion. I would suggest anyone with such an issue do this.

Suggestion to Gary or anyone with an issue like this: Join OSM. Ask the local OSM community for help. Perhaps you edit the bug and some local OSM expert reviews. Or perhaps some local OSM expert fixes it. If you are not sure what you are doing to OSM please do not make the change. Then wait for a few weeks for ABRP to re-import the OSM database. Check to see if fixed.

I don't understand to what you are referring. I should be able to put in Mariposa to El Portal and it take Hwy 140, which is by far the shortest route.

The issue seems to be here.

I've had the previous post reopened and merged into this new one go gather all comments in one place.

Although it shows the road on the map, the planner refuses to use CA Hwy 140 from Mariposa to El Portal, CA.

This is NOT solved! Please fix! Try it yourself. Route from Mariposa, CA to El Portal, CA. It will NOT use Hwy 140.

This should not be closed. Avoid tolls was and is NOT enabled. Also, the route it chooses in error does have a toll, the shorter, more logical route does not have a toll. Please reopen this issue.

Most likely related to using wrong planner setting. I think i saw this one already and it had the setting "avoid toll roads" enabled. Please make sure toll roads ar enot excluded in road settings. 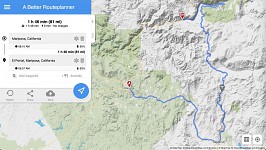 Good idea! The screenshot should make it very clear. The software will just NOT use Hwy 140, which is the direct path.

please share a plan and maybe with a screenshot show us where it is wrong. Then we can check if there is something wrong with the map data.